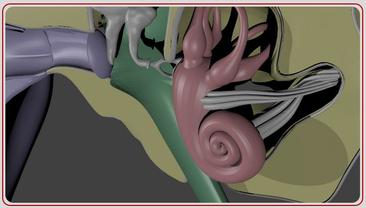 This rare disorder is characterized by some of the following patient complaints.  Patients hear their own internal body sounds, such as their own voice, to a greater degree; also, by singing, yelling or straining the patient may become dizzy.  Audiologically, there is a mild, “false” conductive hearing loss in the low frequencies on the audiogram caused by bone conduction being better than normal due to an additional opening into the cochlea caused by a hole or weakness in the wall of the superior semicircular canal.  This allows bone conducted sound an additional pathway into the cochlea, a so called “third window”, which accounts for the intensified internal body sounds or greater intensity bone conduction delivered by the audiometer when using the bone oscillator.  The definitive test is a high resolution CT scan.  One clinical audiological test that has been found useful is the VEMP test, whose response in cases of SSCD is greater than normal amplitude and lower than normal threshold on the side of the lesion (see testing section for complete description of the VEMP test).