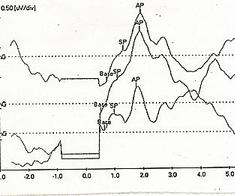 When doctors refer to “tests for dizziness” they generally mean tests of inner ear dizziness (vestibular disorders).  Of course, dizziness tests of the non-inner ear type are many, including MRI, blood pressure tests, lab tests, and heart tests, etc.  The standard tests for inner ear dizziness are referred to as “vestibular” tests that are performed by audiologists.  These tests may reside within the ENT office, or at a separate “balance center” usually operated by audiologists.  Physical therapists also sometimes participate in this type of testing.

VNG, videonystagmography (same as ENG, electronystagmography, if using electrodes instead of video goggles) is the work horse of vestibular testing.  This test looks for nystagmus, the rhythmic jerking of the eyes that is often the sign of inner ear vertigo.  When nystagmus is enhanced with gaze to the direction of its fast phase, it is “vestibular type nystagmus” (Alexander’s Law).  Vestibular nystagmus is also enhanced usually after head shaking.  The VNG also looks for abnormal “oculomotor tests” such as pendular tracking (smooth pursuit) and optokinetic response (OPK or OKN), which if abnormal, can be CNS sings, although a robust peripheral vestibular problem will also disturb these oculomotor test results.  Dix-Hallpike testing is also part of the standard VNG.  The VNG test culminates with warm and cool irrigations of the ear canal using either air or water “calorics”.  This irrigation stimulates the vestibular ocular reflex causing brisk nystagmus (and vertigo) for a minute or so.  The test is looking for equal and robust responses on the left and right side.  A unilateral weakness or bilateral weakness is an abnormal finding usually indicating peripheral vestibular disorder.  Positional nystagmus is also assessed, where a patient has nystagmus in a certain positions.  This can be either a central or peripheral sign, although modern interpretation protocols find positional nystagmus to more often signify peripheral vestibular disorder.  See the Additional information testing section below for more specific information on VNG testing and interpretation.

Rotational chair testing is not available in many vestibular test labs, but is very useful for the following:  If VNG caloric irrigations are suspect of being inaccurate due to narrow ear canals, wax occluding canals, or if bilateral caloric weakness is present.  The rotating chair stimulates the vestibular ocular reflex without warm or cool air or water; however, the test is a bit less sensitive than VNG, except with the faster chair rotation speeds, which are sometimes more sensitive in certain cases than VNG.  Rotational chair results are also useful for determining if a patient’s disorder is “old” or “new”, compensated or uncompensated.

Posturography (Computerized dynamic platform posturography, or CDP) is a platform that the patient stands on which measures static standing balance in each of the three balance systems, providing a score for “vestibular”, “somatosensory” and “visual” balance systems.  The test also measures some automatic postural response measures.  As opposed to VNG and Rotational chair, which measure only the vestibular ocular reflex, posturography measures the vestibular system by assessing vestibular spinal reactions.  Posturography also provides an overall balance score for the patient’s height and age.  This feature is an excellent rehabilitation tool as it provides a baseline for future comparison of progress of the therapy.

Vestibular electro myogenic potentials (VEMP) is a measure of the response of the inferior vestibular nerve and saccule by way of the vestibule colic reflex, which is a neck reflex responsible for keeping the head level.  The response is an evoked potential measured from electrodes placed on the neck while a pulsing sound is delivered to the ear.  Several disorders are assessed by this fairly new test, including leaks in the inner ear balance system (superior semi-circular canal dehiscence), vestibular neuritis affecting the saccule, inferior vestibular nerve disorders, Meniere’s disease and others.

Electrocochleography (ECog) is an evoked potential test which is useful for diagnosing Meniere’s syndrome.  The test is at present somewhat controversial, but we feel that this is due to two rather minor problems.  One is the argument about whether a build-up of fluid in the inner ear is the cause or effect of Meniere’s.  This is basically an academic question because this fluid build-up (hydrops) usually is present when Meniere’s is present to a significant degree, whether or not the fluid is the actual cause of the disorder.  The second problem is the complaint that ECog is fairly inaccurate.  We feel because our results seem to be quite accurate in predicting Meniere’s, that the problem is one of electrode placement and other technical issues when performing the test.  We use contact electrodes on the eardrum and obtain excellent responses which seem to accurately identify cases of Meniere’s based on clinical follow-up.  The patient needs to be tested when having significant symptoms of Meniere’s or the test is less sensitive.